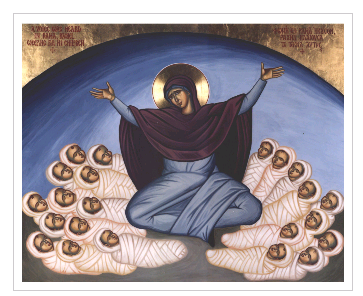 After celebrating the Nativity of Christ , days with joy and love and fellowship with relatives, friends in fellow Christians, today we are suddenly reminded of a very sad event in relation to the birth of that little Child in Bethlehem , i.e. the Solemnity of the Holy Innocents.

The Holy Gospel, which I just read when saying the Sunday Mass is written in Saint Matthew, chapter 2, beginning at verse 13. It tells us the story that the angel appeared unto Joseph and told the Holy Family to flee from Bethlehem as King Herod had planned to kill all the young children in order to prevent the Messaiah to stay alive.
The Holy Family escaped , but so many innocent young children were killed. These were children of two years and under. This terrible event was even foretold by the Prophet by Jeremy the prophet, saying, In Rama was there a voice heard, lamentation, and weeping, and great mourning, Rachel weeping for her children, and would not be comforted, because they are not.

As you and I well know the lamentation, weeping and great mourning still goes on in this suffering world.If we focus on war and terror torn Middle East young children still becoming the victim of violence. The same happens in Central Africa  and closer to home in North Korea , where a cruel regime spends all the money on warfare and luxious goods for themselves, so that young children die of hunger.  These are the children, who are taken up to be with God , their heavenly Father. The Epistle for this Sunday, taken from the book of Revelations , chapter 14, beginning at verse 1 covers the story of the first Holy Innocents so well: I LOOKED, and, lo, a Lamb stood on the mount Sion, and with him an hundred forty and four thousand, having his Father's name written in their foreheads. And I heard a voice from heaven, as the voice of many waters, and as the voice of a great thunder: and I heard the voice of harpers harping with their harps: and they sung as it were a new song before the throne, and before the four living creatures, and the elders: and no man could learn that song but the hundred and forty and four thousand, which were redeemed from the earth. These are they which were not defiled with women; for they are virgins. These are they which follow the Lamb whithersoever he goeth. These were redeemed from among men, being the first-fruits unto God and to the Lamb. And in their mouth was found no guile: for they are without fault before the throne of God.

Constantly society and Governments ask themselves what they can do to prevent to shed of innocent blood, in particular children and because in this long suffering world evil is still  dominating , it is a tremendous task and responsibility. And yet  the major solution is taking us back to the message of Christmas " Peace and Goodwill to all men" and " Love came down at Christmas".If all of us walk in the footsteps of Christ, whose ways were Peace and righteousness, then we are on the right road, we also work hard towards the coming of Christ on the clouds of Heaven, when we will see a new Heaven and Earth where sorrow and pain shall be no more and no Holy Innocents.