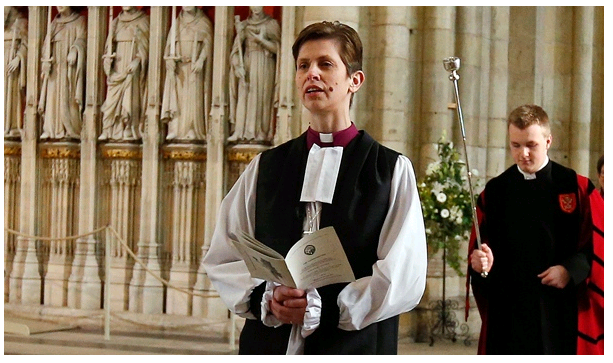 Dear Fathers, Friends in Christ,
Whilst in other parts of the Anglican Communion  ( Canterbury ) female Bishops have been around for a while , this week , finally the first female Bishop was ordained in the United Kingdom. The picture above shows the Revd. Libby on her way to be
ordained as Bishop of Stockport.  This event tells me and everyone else , that
the Anglican Church is no longer part of the Holy Catholic Church, but moved into the direction of Protestantism. I guess she has done that already with the first ordination of female Deacons and Priests.
Why is then then a woman cannot be a Deacon, Priest or Bishop?
In the Person of Christ the Head
At the most basic level, the answer to the question is simple: The New Testament priesthood is the priesthood of Christ Himself. All men who, through the Sacrament of Holy Orders, have become priests (or bishops) participate in Christ's priesthood. And they participate in it in a very special way: They act in persona Christi Capitis, in the person of Christ, the Head of His Body, the Church.
Christ Was a Man
Christ, of course, was a man; but some who argue for the ordination of women insist that His sex is irrelevant, that a woman can act in the person of Christ as well as a man can. This is a misunderstanding of Catholic teaching on the differences between men and women, which the Church insists are irreducible; men and women, by their natures, are suited to different, yet complementary, roles and functions.
The Tradition Established by Christ Himself
Yet even if we disregard the differences between the sexes, as many advocates of women's ordination do, we have to face the fact that the ordination of men is an unbroken tradition that goes back not only to the Apostles but to Christ Himself. As the Catechism of the Catholic Church (para. 1577) states:

"Only a baptized man ( vir) validly receives sacred ordination." The Lord Jesus chose men ( viri) to form the college of the twelve apostles, and the apostles did the same when they chose collaborators to succeed them in their ministry. The college of bishops, with whom the priests are united in the priesthood, makes the college of the twelve an ever-present and ever-active reality until Christ's return. The Church recognizes herself to be bound by this choice made by the Lord himself. For this reason the ordination of women is not possible.

Priesthood Not a Function But an Indelible Spiritual Character

Still, the argument continues, some traditions are made to be broken. But again, that misunderstands the nature of the priesthood. Ordination does not simply give a man permission to perform the functions of a priest; it imparts to him an indelible (permanent) spiritual character that makes him a priest, and since Christ and His Apostles chose only men to be priests, only men can validly become priests.

The Impossibility of Women's Ordination

In other words, it's not simply that the Catholic Church does not allow women to be ordained. If a validly ordained bishop were to perform the rite of the Sacrament of Holy Orders exactly, but the person supposedly being ordained were a woman rather than a man, the woman would no more be a priest at the end of the rite than she was before it began. The bishop's action in attempting the ordination of a woman would be both illicit (against the laws and regulations of the Church) and invalid (ineffective, and hence null and void).

My personal view is that I don't have any problem with the fact that females feel that they have a calling to the Priesthood and that they might be suitable.
But... based on the above mentioned reasons I cannot support  female ordinations in the Holy Catholic Church. Many many years ago our Lord Jesus Christ made that decision to appoint only men as Apostles and over the years this male Apostolic succession has not changed until the present and last centuries.

This is the Mission of the Church in which I serve as a Priest : Our Church is a family of believers committed to living the faith once delivered to the Saints (Jude 1:3). We believe the ‘Jesus Christ is the same yesterday and today and forever” Hebrews 13:8
If Jesus ordained only men to the Priesthood  then, He would always do this, in fact forever and forever.
.
The tradition of the Anglican Catholic Church rejoices in the faith and witness of the Christian church of every age and resolves to continue in the fullness of that faith in this age and that which is to come.