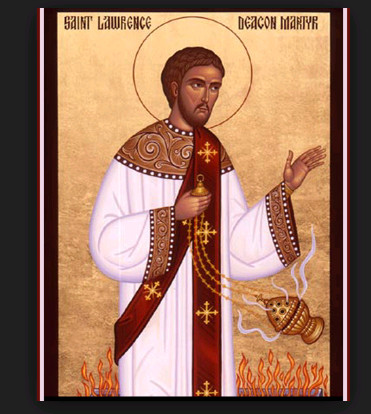 Imagine the amount of strategy wit shrewdness you need to play a card game like bridge or poker. Every hand dealt contains literally thousands of possible outcomes, so you have to be sharp. Now, have you ever thought that living the Christian life might require a similar kind of shrewdness?

That’s one way to think about St. Lawrence, whose feast we celebrate today. In ad 258, the Roman emperor Valerian issued an edict that all the clergy were to be killed. The prefect of Rome also demanded that Lawrence hand over the Church’s wealth. Knowing that his days were numbered, Lawrence, a deacon and the treasurer of the Roman Church, took a calculated risk. First, he distributed the Church’s wealth to the poor instead of giving it to the prefect. Then, he brought the poor before the prefect, saying, “These are the treasures of the Church.”

Enraged, the prefect had Lawrence put to death. But it was too late—the story of his good humor and bravery spread, encouraging believers in Rome and beyond, right down to the present day!

St. Paul once wrote, “Watch carefully then how you live, . . . making the most of the opportunity”

(Ephesians 5:15, 16). Lawrence clearly had been training his mind so that he could see opportunities before him, even when he was facing the threat of death. He had already been “watching carefully” how he lived in smaller situations, and so he was prepared to keep doing so when the stakes were high. And so, because of his shrewdness and good wit, Lawrence was able to sow “bountifully” for God (2 Corinthians 9:6).

What challenging situations do you find yourself in? Take a look around, and ask the Spirit to show you creative, even shrewd, ways to turn them into opportunities to glorify the Lord. The more we know we are safe in his hands, the more brave we become. And that courage opens up new paths for us to walk—paths of glory that we never before knew existed!

“Holy Spirit, set me free from fear so that I can glorify you in every situation.”