The Twentyfourth Sunday after Trinity 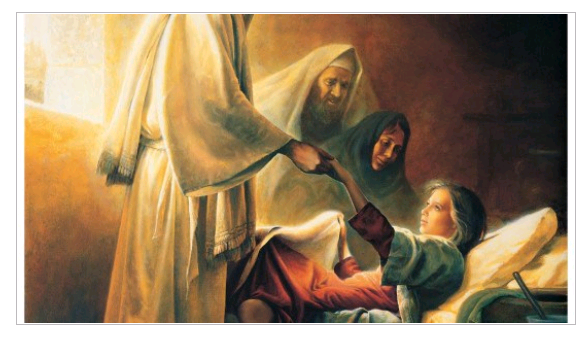 Matthew 9:18 While he was saying this, a ruler came and knelt before him and said, "My daughter has just died. But come and put your hand on her, and she will live." 19 Jesus got up and went with him, and so did his disciples. 20 Just then a woman who had been subject to bleeding for twelve years came up behind him and touched the edge of his cloak. 21 She said to herself, "If I only touch his cloak, I will be healed." 22 Jesus turned and saw her. "Take heart, daughter," he said, "your faith has healed you." And the woman was healed from that moment. 23 When Jesus entered the ruler's house and saw the flute players and the noisy crowd, 24 he said, "Go away. The girl is not dead but asleep." But they laughed at him. 25 After the crowd had been put outside, he went in and took the girl by the hand, and she got up. 26 News of this spread through all that region.

A temporary Sunday School teacher was struggling to open a combination lock on the supply cabinet. She had been told the combination, but couldn't quite remember it. Finally she went to the Vicar and asked him for help. The vicar came into the room and began to turn the dial. After the first two numbers he paused and stared blankly for a moment. Finally he look serenely heavenward and his lips moved silently. Then he looked back at the lock, and quickly turned to the final number, and opened the lock.
The teacher was impressed. "I'm in awe at your faith, vicar," she said.
"It's really nothing," he said. "The number is on a piece of tape on the ceiling."

Definition of faith ? Hebrews 11:1. Now faith is being sure of what we hope for and certain of what we do not see.
Faith is a trusting word - e.g. sitting on pews, we don't think twice about trusting them ( even if they are uncomfortable )

Ruler, of synagogue who we know from Mark and Luke was called Jairus. Person of power & influence. He came and asked Jesus on bended knee. Respect and pleading. He showed great faith to ask to raise dead. Never happened before. Faith/trust that his touch would restore life.

When he arrived the mourners laughed : was too late; & His words that she was asleep. Touched girl, risking making himself ceremonially unclean by touching a dead body. Raised her to life.

Faith of woman who had been bleeding for 12 years. Excluded her from religious life, considered unclean. She trusted that Jesus had the power to make her well. Didn't ask for laying of hands, maybe felt unworthy. Maybe felt he would not want to touch an unclean woman. Jesus told her her faith had healed her and she was healed from that moment. It wasn't a superstitious faith in a garment, e.g football players last out, put kit on in certain order.
This woman's health was not the only thing that was healed. She was restored to the religious community that she had been cut off from for 12 years.

We have seen Jesus' power to raise the dead and to heal the sick. This is about more than this. More than the faith of people. About a Saviour who reaches outside the boundaries of religion.

Why would the Pharisees not have had anything to do with the sick woman and the dead girl ? They were all ceremonially unclean. This would bar them from the Temple & religious life.

Jesus compares himself to a Doctor in verse 12. Not talking about his physical healing ministry, but spiritual healing ministry to reconcile sinners to God i.e. everyone.
Quote from Hosea. Written against the religious leaders who offered sacrifices, went through religious rituals, yet this didn't affect the way they acted. Mercy, covenant love with compassion for the lost is more important than religious observance, says Jesus..

Pharisees thought Messiah would come and crush the sinners and support the righteous i.e. them. They were not "righteous" in God's sight, just their own !

Jesus accepted sinners who trusted in him and denounced the self-appointed righteous.

We are justified, i.e put right with God, through trusting in Jesus, not by adhering to religious rules or thinking that we are "good". True faith is radically trusting in Jesus and sharing this with others.

Our Response Today :
Thank God for sending Jesus.
Rely on faith not works although faith must result in works.
No-one is outside God's love in Jesus.
We shouldn't look down on someone think they are a hopeless case.
Follow Jesus example and go out to people

John Powell's book entitled "Through The Eyes of Faith", tells about his prison ministry. About once a month, he visits a prisoner in the state penitentiary. He describes how difficult that is for him personally... the atmosphere is dismal, dark, depressing... and charged with suspicion. However, on one occasion, Father Powell said he had an enlightening and inspiring experience in that stern and somber prison environment.  An elderly woman was standing beside him as they moved through the visitor line. Together, they went through numerous security checkpoints. They were required to produce identification; they were required to pass through metal detectors; they were led by heavily armed guards through countless doors made of strong steel bars. And through it all, John Powell said he could not help but notice how this sweet, dear woman was smiling warmly toward everyone, waving tenderly to the guards and calling many of them by name, and greeting everyone in a kind and loving way.

John Powell was fascinated with her. She was absolutely radiant. She was a ray of sunshine and a breath of fresh air in that sullen place. Suddenly, John Powell said to her, "Gee, I'll bet you bring a lot of love into this world with your smiling face and words."  "Father," she replied, "I decided long ago that there are no strangers in my world. Only brothers and sisters. Some of them I haven't met yet."
Reflecting on that experience, John Powell wrote this remarkable paragraph.

Amy Carmichael;
"Give me the LOVE that leads the way,
The FAITH that nothing can dismay,
The HOPE no disappointments tire,
The PASSION that will burn like fire,
Let me not sink to be a clod:
Make me thy fuel, O flame of God."