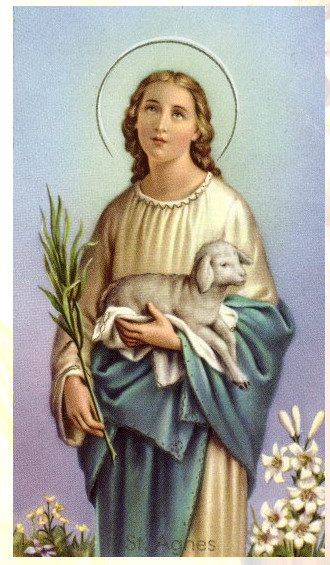 Apologies for not blogging so regularly, but am in the middle of packing and shifting inter state in Australia.

Saint Agnes was a member of the Roman nobility, born January 28, 292 and raised in a Christian family. Her name means " pure " in Greek and "lamb" in Latin .
She was a beautiful virgin, who turned away all suitors, declaring that she could have no spouse but Jesus. Many young men wanted to marry her. She said that to do so would be an insult to her heavenly spouse, that she would keep her consecrated virginity intact, accept death and see Christ. Living as a Christian in the time of the
persecutions of Emperor Diocletian, she was under constant threat of torture and death.

Among those she refused was the son of the profhet Sempronius. This prefect wished Agnes to marry his son, and on Agnes' second refusal he reported her to the authorities as being a Christian and condemned her to death. Roman law did not permit the execution of virgins. Legends tell of her being thrown into a brothel where her purity was miraculously preserved. The only man, who attempted to violate her was the son of the prefect. He struck blind, but Saint Agnes healed him with prayer. The prefect heard what happened to his son and ran to the brothel, accusing Agnes.
He then wanted to let Agnes go, but fearing being banished put a lieutenant in his place who first tried to kill Agnes by a fire which did not harm her, and then ended up killing her with a sword. She became a martyr at the age of 12.

Saint Agnes is buried beside the Via Nomentana in Rome. It is is said that her execution shocked many Romans and helped to bring an end to the persecutions.
Soon after her death, Agnes became a favourite Saint. One of Emperor Constantine's daughters built a church on the site of Agnes's grave. The wool of two lambs is blessed at the Church of Saint Agnes in Rome. This wool is then woven into the pallium ( stole of white wool) which the pope wears and confers on archbishops as symbol of their respective jurisdiction. Her virginity and heroism are renowned and her name occurs in the prayer " Nobis quoque pecatoribus", in the canon of the Mass.

We are living in a time where virginity until marriage, chastity etc are no longer important. Not in the world, but sadly also not in the Church of God and clergy no longer preach on those subjects and I am not even sure what some of the clergy give in the way of advise to a guy and a girl living together. In this world we now refer
to couples as partners and not as husband and wife.
A collegue Pries of mine said once :" If I preach chastity and no sex before marriage from the pulpit then all the young people dont come back to Church. How Christian principles and standards have dropped over the years.

I like to close the blog for this thursday evening with this prayer, do you think you can say this also where ever in the world you may be ?

Christ Jesus, Saint Agnes was only a teenager when she had to decide between life and dying for You. She had been ordered to sacrifice her virginity to pagan gods, and she sacrificed her life instead. Since she is the patron Saint of engaged couples, we ask her to intercede for all young people we know  who are dating, planning to get married , divorced and lonely, co-habitating, married without the Sacrament, and everyone else who is facing the temptation of sexual relations outside of marriage. Help them to grow in their intimacy with You, and teach them to rely on You to remain and chaste. Saint Agnes, pray for us.