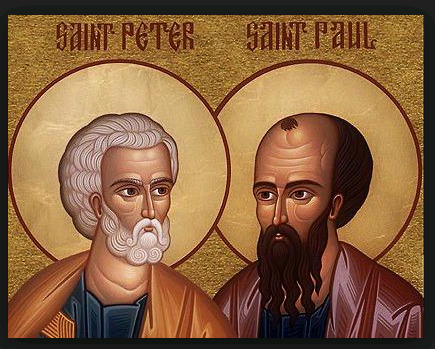 
The Apostles, Saint Peter and Saint Paul only met each other a few times. Those meetings did not always go too well.
But in spite of their strong characters and large differences of opinion they shared the same calling. They clashed sometimes, but our God let them onto different paths.

Yes, there is a common bond between these two men:

They were both strong preachers, their words brought many people to repent.Both were persecuted because of their Faith, put in prison and set free in a miriclous way.Both men received visions, which gave them a clear direction regarding preaching the gospel, and God sent them someone to assist them with each new task.Saint Peter and Saint Paul both had the gift of healing, the people surrounded them in order to touch them.At the end both men were martyred to death in Rome. Saint Peter was crucified up side down and Saint Paul was beheaded.
They were two different personalities. And they preached the Gospel in different ways. But both had dedicated their lives to the service of Jesus Christ.


Nowadays God's call is not much different. Also in a Parish there are people who dont get on too well each other. One Parish Committee might not get on with the other. We, ourselves could be trouble by one or more people, who follow Jesus Christ in a totally different manner.


But let us learn something from Saint Peter and Saint Paul. Differences dont have to lead to separation.All of us try to serve our God to the best of our ability. We can pass the message of Salvation on in different ways, but we remain on the same path. Let us bless each other other and support each other in Holy Prayer.