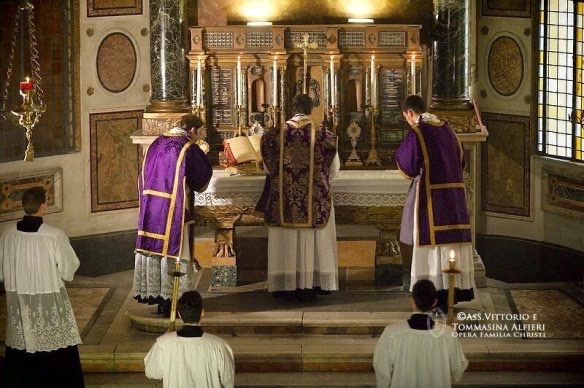 So far we have followed Our Lord from the manger in Bethlehem to His public life, to the time when, baptized by John, He began and carried out His preaching about the kingdom of God. But the hour is approaching, His hour of suffering and dying for the salvation of men. He teaches divine doctrine; He proves His origin, His mission, His sovereign domain over all creatures, His absolute right as God made man to impose upon men, now become His brothers, the way to follow so as to gain eternal life. He increases the number of His miracles of good will for the infirm, of mercy for sinners, so that it will be well established that He is the dispenser of life and the master of man’s destiny. He presents Himself in the full light of truth and goodness, in such a way that the words of the prophet are realized in all justice: “They have hated me with an unjust hatred.”

This recounting of Our Lord’s public life continues in the Sundays from Septuagesima to Easter. We follow the Master step by step. But the Church is already troubled. She knows that His days have been reckoned. She too counts them. Starting this Sunday, she tells herself, “Seventy days, again!” In seventy days this Divine Mouth will be closed! In seventy days this so good, so compassionate, so merciful Heart will no longer beat! In seventy days He who is so beautiful, so holy, so true, He will die on a cross! And so the Church’s heart is troubled; it is moved; it is already in mourning.

In union with sorrowful longing of the ages, during Advent the Church puts on violet vestments. The joyful feasts of Christmas have adorned her in the splendour of gold and silver or simple white finery, the symbol of joy. The priestly vestments for the Sundays and ferias after Epiphany and Trinity Sunday are green. Innocent III explained the meaning. He said that the colour green is an average colour, quite ordinary, common, indeed, it may be found in profusion all over the earth. Thus he inferred that this common colour is suitable for these Sundays of which the solemnity is comparatively inferior to those of Advent and those in preparation for Easter.

Therefore, beginning with Septuagesima Sunday — the first herald of the solemnities of the Passion of the Saviour and of His resurrection — the Church, absorbed by such sorrowful remembrances, puts on violet vestments.

Seventy days! Not that this number is absolutely exact. Rather, it is better to say, “in the seventh decade [of days], in Septuagesima,” because, in reality, there are no more than sixty-three days in the nine weeks between Septuagesima and Easter, but the last “decade” is at least begun. The Church uses this round number in remembrance of the seventy years Babylonian captivity of the Jews, symbol of the captivity of all of humanity under Satan’s empire. Easter is the day of final deliverance. And this is why on this Sunday that figuratively marks the beginning of this captivity, the liturgy counts seventy days until the triumph of Christ 1.

This usage is very old. It can be traced back to Rome in the 8th Century, and even earlier in the East. But the method for counting the days and, consequently, of celebrating these Sundays has not been the same everywhere.

The three Sundays of Septuagesima, Sexagesima and Quinquagesima combine with Lent without taking on all the solemnity. They are the prelude for the preparation for Easter; they are not yet the preparation itself.

Nevertheless, starting with Septuagesima, signs of mourning are manifested throughout the liturgy; signs which become more and more numerous until the death of the Saviour. It is not only through the exterior ornaments that the liturgy joins from afar with Our Lord’s Passion, the texts themselves are impregnated with it. The joyful cry of the Alleluia is immediately removed, in all the offices and the Mass; the Gloria is also eliminated. Thus, beginning with Septuagesima, a shadow of sorrow shrouds the whole of the Divine Office. We follow the Master; we listen to Him, but in looking at Him, our hearts are moved to compassion. We know where He is going, and, like Him, we must “steadfastly set our faces” (St. Luke 9:51) to go up to Jerusalem. At the end is Calvary. Let us go with Him, without fear.