The Sunday after the Ascension of our lord. 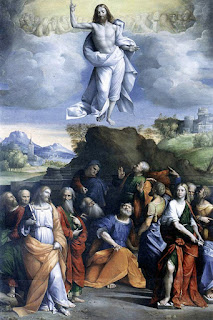 Last Thursday, on the Ascension Day, we celebrated the beginning of the end of the world. The world began to end on the day that Jesus Christ ascended into heaven.
We human beings flatter ourselves, of course, and we insist that we and the world around us are developing, changing, evolving — constantly becoming something better than the world from which our Lord ascended. We like to think that we are perfecting humanity through our technologies, theories, and laws, even though the Son of God made man who ascended to his Father’s throne was as perfect as a human being can be. Moreover, Jesus Christ remains and will remain the only perfect human being until the world has ended and the redeemed are raised from the dead in their glorified bodies, just as Jesus Christ was raised at Easter.

The usual scoffers, of course, have a field day with the Ascension. They mock Christians for accepting an historical fact that they themselves choose not to believe: that Jesus Christ ascended bodily into heaven. They chuckle at the notion that heaven is "up," without considering that even astronauts have to go "up" to leave the ordinary world behind, or that in every human culture "down" symbolizes the grave. Likewise, they do not stop to think that the visible Ascension of Christ was for man’s benefit, so that we could understand what was happening.

Our Lord could just as easily have left this world without any appearance of movement and without any witnesses. He chose, instead, to ascend in the sight of the Apostles so that they would understand that not just "spirits" but human bodies raised from death and sanctified by God have a place in heaven before the Father’s throne. Christ’s Ascension was a promise to the faithful that they would one day follow him where fallen and unredeemed man has no right to go. Christ’s Ascension also promised the faithful that he would return, as he had left, in glory to judge the living and the dead. The injustices of this world that appear to us to go uncorrected are already judged by the glorious Savior who will return to set every one of them right forever on the Last Day.

Nor do the Scriptures say, as so many illiterates seem to believe, that our Lord ascended "up, up, and away" like a rocket or Superman. St. Luke, in his introduction to the Acts of the Apostles tells us "while they beheld, he was taken up; and a cloud received him out of their sight" (Acts 1:9). That cloud, as anyone trained in the religion of the Old Testament would have known, was not a bunch of water vapor floating over the earth. That cloud was the Shekinah, the visible sign of the glorious presence of God that once filled the innermost sanctuary or "holy of holies" of the Temple at Jerusalem. When our Lord Jesus Christ was received into that cloud, he was received into the glory of his Father.

It was the "holy of holies" of the Temple on earth, separated from the rest of the Temple by a great curtain or veil, that the High Priest would enter to offer the yearly sacrifices for sin on the Day of Atonement. That veil was torn on the day of our Lord’s crucifixion, at the moment of his death, signifying the end of those yearly sacrifices and that the Shekinah Glory of God had left that sanctuary (Matt. 27:51). A new, permanent sacrifice for sin, Jesus Christ himself, had been killed, and that perfect sacrifice of the Son of God made man could not be offered in an earthly sanctuary by an ordinary, sinful human priest, no matter how exalted his title.

And so the Father raised his crucified Son from the dead, to become our Great High Priest of the New Testament, to offer himself once and for all, for the sins of the world. Only the sinless Jesus Christ, who willingly laid down his life to glorify his Father and to redeem us from sin, is fit to offer his Blood for our redemption. And only the "holy of holies not made with hands," the sanctuary of God’s own presence is a fit place for such an offering. Christ’s Ascension, then, his being received into the cloud of his Father’s glory, is his entrance into the heavenly sanctuary to offer himself for our salvation.

Until that offering is made, there is no redemption or salvation. Good Friday and Easter Day are as incomplete as the sacrifice of an earthly priest who kills the sacrificial victim but never offers it to God. Death is never a complete sacrifice, whether of bulls and goats or of the Blood of the Son of God, until the sacrifice is brought into God’s presence and offered to him. Thus, St. Paul can write: "But Christ being come an high priest of good things to come, by a greater and more perfect tabernacle, not made with hands, that is to say, not of this building; Neither by the blood of goats and calves, but by his own blood he entered in once into the holy place, having obtained eternal redemption for us" (Hebrews 9:11-12).

After our Lord and Savior Jesus Christ has made this one offering of himself that is sufficient for the remission of sins forever, he is seated at the right hand of his Father. His being seated tells us, first, that he is enthroned in his Father’s glory. Just as important, the enthronement of Christ tells us that the work of salvation is done. He rests with his Father, in the communion of the Holy Ghost, just as the Blessed Trinity rested on the seventh day when the work of creation was finished.

This one sacrifice of Jesus Christ, once offered, so that there is no other offering for sin ever again, opens the way for us to the Throne of his Father. For this reason, St. Paul can write again of how our lives have been changed:

Having therefore, brethren, boldness to enter into the holiest by the blood of Jesus, By a new and living way, which he hath consecrated for us, through the veil, that is to say, his flesh; And having an high priest over the house of God; Let us draw near with a true heart in full assurance of faith, having our hearts sprinkled from an evil conscience, and our bodies washed with pure water. Let us hold fast the profession of our faith without wavering; (for he is faithful that promised;) And let us consider one another to provoke unto love and to good works. (Hebrews 10:19-24).

Those of us who have been "washed with pure water" or baptized into the death of Jesus Christ, have been given the promise of our own entry into the presence of God in our resurrected bodies by the power of Christ’s one sacrifice once offered. Our chief business, therefore, whatever the other details of our vocations may be, is to live out in the state of life it has pleased God to call us the profession of our faith in Jesus Christ crucified and resurrected. We are not to waver or to hold back in witnessing to this faith, and our chief witness is more than just pious talk about God and his Christ. Our chief witness is Christ-like lives, in which we encourage one another to love and good works.

Imagine a world in which the chief competition was in the expression of love for God and of charity for others and you have visualized what a converted, Christian world ought to be as we await the Second Coming of Jesus Christ. This is the kind of world St. Peter is encouraging us to be, and the kind of people he is trying to teach us to be, in this morning’s Epistle. He tells us "the end of all thing is at hand." That "end" in Greek is both the "end of the world as we know it" and the "fulfilling of the world’s created purpose" to glorify God in heaven. That end is "at hand," because the Greek behind it also tells us that "the end is approaching, whether we pay attention to it or not."

St. Peter, as an Apostle of Jesus Christ should, also commands us "Be ye therefore sober, and watch unto prayer." His original Greek words mean more than "sober from alcohol or drugs." They mean "in our right minds," and we are never in our right minds if we do not think of God, of the sacrifice of Jesus Christ, and of Christ’s Second Coming first in whatever we do. We are, likewise, to keep watch through prayer for that Second Coming, keeping in constant touch with the Father, through the Son, and by the Holy Ghost.

However others may organize their understanding of history, we Christians in our right minds must understand that there are very few events that truly "change the world." There was the Creation, by which God called the world, including man, into being from nothingness. There was the fall of man, by which we rebelled against God. There was the crucifixion of Jesus Christ, followed by his resurrection and ascension, making the one sacrifice that redeems mankind from sin. And there will be the Second Coming of Christ and the resurrection of the dead.

Our daily struggles, great and small, are important to God who loves us, even if we do not get into the history books. At the same time, and precisely because we love God, our greatest landmarks in history cannot be ourselves or our fellow men, no matter how much we respect their great deeds. Only the sacrifice of Jesus Christ saves us, and the next world-changing event will be Jesus Christ’s return. We are in the "last days," and we have been since Jesus Christ was received into the cloud of his Father’s glory. And so we keep the Ascension Day as one of the holiest days in the year, and so we watch unto prayer in expectation of our Lord’s Second Coming in glory.