The First Sunday after Trinity 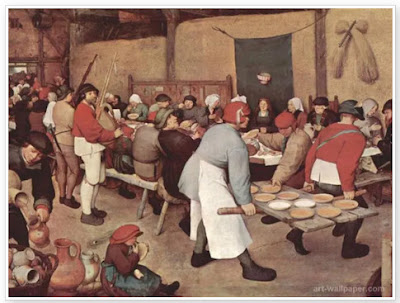 "The master then said to the servant, 'Go out into the highways and along the hedgerows and force them to come in. I want my house to be full, but I tell you that not one of those invited shall taste a morsel of my dinner.'"
Today, Jesus tells us a story about an invitation to a dinner party. You and I have been invited to dinner many times and we know that an invitation to dinner is something that we accept, not only to fill ourselves with all kinds of food and nourishment (even though that does happen), but there is something more to the acceptance of the invitation. There is a bond that is established between host and guest. It is really for this purpose that we would have guests for dinner: to share the intimacy of the family with the guest. It is a time for great joy and happiness.

I will tell you a little story about myself that happened some time back and it was very embarrassing. As a  priest, I was invited to dinner to a couple's house. Before dinner we were visiting over a cocktail about many things including various kinds of food. And, as you can see, I like just about anything and everything. But I said, "There is one spice that I just can't take. I don't like curry. To me, it tastes like soap. I just don't like it." Saying all this to the couple beforehand, what do you suppose was the entree that night? Curried chicken! I felt like an absolute fool. There was a lot of backing and filling, if you can imagine, in my conversation after that. Such statements as, "Oh, this is really good curry. If I knew that curry tasted like this, then that's a whole different thing." I don't think they believed a word of it! But I still don't like curry. However, I didn't go there, to that house to eat curried chicken or anything else just to fill my stomach. I did it because they had invited me to share the intimacy of their family. That was most important; not whether or not the curried chicken was good.

Because you and I understand what a dinner invitation is really about, Jesus used an example. So often He tried to teach us about the intimacy which God desires in His family. How often Jesus couches this teaching in terms of a shared meal together.

Look at the different times that Jesus used a meal as a setting for a teaching during His lifetime: He worked His first miracle at the wedding feast of Cana - at a meal. He also did some teaching and some criticizing of Simon the Pharisee about the behaviour one should display in this new kingdom that He had come to establish. Jesus shared with His disciples, the night before he died, what was most important on His mind before he would leave them. It's five chapters in John's Gospel! And, of course, at that same meal He gave us His own body and blood as our food. After the resurrection. He appeared to His disciples at a meal in the upper room. The two disciples on the road to Emmaus came to know Him in the breaking of the bread. Over and over again, there was this setting of a shared meal. It is no wonder that Jesus would also use such a setting in His parables, as He does today.

There is a parallel story that you are familiar with in Matthew's Gospel. There was a king who gave a banquet for his son and he sent out invitations. When all of the invited people failed to show, they were excluded. Then he brought in anybody he could find, from the highways and hedges, to fill the hall. There was also the added detail in Matthew's Gospel about the man who wasn't wearing a wedding garment.

But Luke's story, our Gospel reading this morning, is much simpler. This was just a man who was giving a dinner party and he invited many. The excuses that they came up with are absolutely beyond belief. "Well, I just bought some land and I have to go off and see it." I suppose that individual was so consumed with the accumulation of things that he really didn't have time for the intimacy between himself and his Lord. And then there is the next individual. What a weak excuse that was! "I've just bought five yoke of oxen and I've got to go out and try them." "I'd rather be plowing rocky ground than eating a meal with you".

Now the third excuse I always thought was the lamest of all of the excuses. But that individual at least could fall back on the Word of God, because he was using something that was in the law of Moses to excuse himself. You find it in the twenty-fourth chapter of the book of Deuteronomy. I think it's rather humorous: "When a man is newly wed, he need not go out on a military expedition nor shall any public duty be imposed on him (like a dinner). He shall be exempt for one year for the sake of his family to bring joy to the wife he has married" (Deut. 24:5). At least he had a better excuse than the others.

Each one of them had spurned the invitation to intimacy. When Luke gave us the parable, he had in mind something much broader. The people who were invited were the Jews. They had rejected the Messiah, the invitation to intimacy with God himself. Now the invitation was sent out to anybody and everybody. Jesus teaches us that His church. His kingdom, is not an exclusive club, but rather He came in order to invite all of humankind to accept the message of salvation.

I find it interesting to hear the kinds of people that the Master says should be collected. He says, "Go out and find the blind, the beggars, the lame people, all of the people that are the dregs of society. Get them all in here. I want a full house. All the bums you can find!" Truly that is what he was saying. You know that you and I have to identify, not with those people that rejected the invitation, but with that second group collected from the highways and hedges.

How many times are we really blind to God's teaching. We can't see the woods for the trees. We can't see the love of God that surrounds us. We're so blind. We're lame too. We're crippled by our sins that we repeat so often that they become a part of us and that crippling effect over a period of time leaves us in such a weakened state. We are beggars for we know our poverty: the poverty of our own spirits without God. There isn't much there until God fills us with Himself.

The banquet that you and I have been invited to this morning is a very special one. Here we are collected from all kinds of places, assembled in this church, in order that you and I might share a special kind of intimacy with our Lord and God. What a privilege it is! Here at this time we do the most important thing that we could ever do this week. First of all, we are privileged to offer ourselves, all that we are and have - body and soul - to God our Father, through and with Christ our Lord.

But we are also privileged to receive in our hands the Lord of the universe under such simple appearances. Here is the God-made-man, come to earth wrapped in swaddling clothes. Here is the Healer, that if I could touch but the hem of His garment I would be healed. And here He is, in our hand. Here is the One who hung upon a tree in order to give us eternal life. Here is the One who rose from the dead in order that we can confront death and know that it isn't the end of things, but the beginning of life eternal.

What a gift our God has given to us. Talk about the intimacy of an invitation to dinner! How much more intimate could our God be with us than to become one with us as our food? Not only that, but one with one another in this food? For one bread makes us one body in Christ (I Cor. 10:16). Christ our Lord is not divided at communion time. It isn't one Christ for one person, another Christ for another, and another Christ for someone in Ireland and Christ for one in Australia and one in England. No, it is the same Christ our Lord that each and every one of us receives this Sunday morning. Are we one with them? Yes, we are. This is the communion of saints.

Is there anything that we could possibly do that would be more important than to accept the invitation - to follow the mandate - of Jesus Christ our Lord at that first Eucharist when He said to His disciples, "Do this in memory of Me"?