The Fourth Sunday after Easter 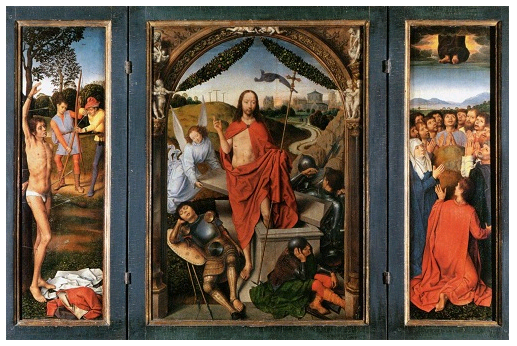 "It is expedient for you that I go away. For if I go not away, the Comforter will not come unto you. But if I depart, I will send Him unto you."

It may have escaped your notice, but as the Church lined up her liturgies for these Sundays after Easter, she didn't exactly follow a sequence in the Gospel readings. For example, last Sunday we read from St. John's Gospel in the sixteenth chapter from the sixteenth verse onward. Today we begin the sixteenth chapter but at the fifth verse. There is a transposition of these passages of Scripture because, as we near the festival of Pentecost, the Church feels it is important for us all to understand what the meaning is in that Pentecost, the coming of the Holy Spirit.

Last week the reading was about the imminent departure of the Lord from this world as He talked to His disciples about His ascension. This week it is about the sending of the Holy Spirit, the Church uses this transposition of readings to convey a liturgical message to us. It is probably also one of the more difficult passages in St. John's Gospel to comprehend. It is not very easy to understand in the translation in the Prayer Book. So I would have you bear with me as I give you a different translation that I think is a little clearer. It is so important for us, as we near the festival of Pentecost, to know what the Church is saying about the Holy Spirit and about our role as members of the Church. What is the Holy Spirit supposed to be doing in us?

Jesus begins by saying, "Now I go back to Him who sent me. Not one of you asks me, 'Where are you going?' Because I have had all this to say to you, you are overcome with grief. Yet I tell you the sober truth. It is much better for you that I go. If I fail to go, the Paraclete will never come to you."

Here is a different word than what the Prayer Book used. The Prayer Book used the word "Comforter." This translation uses a Greek term, Paraclete. (Not parakeet, but Paraclete!) A paraclete in Greek terminology is two things: a witness and a prosecutor. In their law they were rolled into one. The individuals who showed up at court to testify were people who actually did the. prosecuting, accusing the person of the crime. It was a very serious thing to do because if those witnesses, those prosecutors, were wrong or were lying, and it was a capital offense, and they were found to be lying, they were killed. It was a pretty special role: witness and prosecutor - or paraclete.

"If I fail to go, He won't ever come to you," Jesus says, "Whereas if I go, I will send Him to you." And this will be the paraclete's role, the witness's role. "When He comes, He will prove the world wrong. He will prove the world wrong about sin, about justice, about condemnation." Then John takes up each one of these three elements one at a time.

"He will convict the world about justice." Remember Jesus was unjustly condemned to die. And He died on the cross. There is the injustice. "About justice from the fact that I go to the Father and you can see Me no more." What does He mean that He is going to convict the world about justice in this way? It means very simply that as He returns to the Father, He will still remain with us by means of His Holy Spirit within His Church.

Finally, "He will convict the world about condemnation, for the prince of this world has been condemned." The prince of this world - the satan, the adversary - that principle of evil has been condemned. Jesus was condemned to die on the cross. It was by the power of that darkness that it happened. Now the Holy Spirit would say, "Ah, no!" The irony of it all is that as Jesus was condemned to die on the cross and did so; that very condemnation brought about the condemnation of the evil one. It's the role of the Holy Spirit, the accuser, the witness, to present that testimony to us.

You and I are called upon to be witnesses and to convict the world about what true justice is. We hear a lot about justice in our society these days. There are elements of injustice, of course. But true justice, according to Saint John, is a right relationship with God. It has to begin there and flow from that or it isn't authentic justice. There is no other way for us to live as a Christian people than to be rooted and grounded in the Person of Jesus Christ our Lord as the center of our being. We do not belong to some nice little holiness club with a set of ethical standards. We belong to a living Organism called the Body of Christ that is animated by the Holy Spirit. And that Holy Spirit is to give witness to the world through us.

"I have much more to tell you," says Jesus, "but you cannot bear it now. When He comes, however, being the Spirit of Truth, He will guide you to all truth." Remember that dialogue between Jesus and Pilate at Jesus' mock trial? "What is truth?" said Pilate. He didn't know what truth was when it was standing right in front of him! Pilate isn't unique. This is a world that is so often living a lie, living in error; not living the truth. The truth is Jesus Christ. The truth is that He is Lord, that He is power in our personal lives. He is everything He claims to be. Now it is up to us to bear witness to that, to show the lie for the lie that it is. There is no other way than the way of Jesus Christ our Lord.

We call God our Father, not in some symbolic way, but because He is our Father, truly and really. We have been begotten in the waters of Baptism. Jesus Christ our Lord is our Savior. He is our brother. And it is the same Holy Spirit that animated Christ in the womb of His mother that animates His Church, individually and collectively. This is our identity! What we are! This is why we need the Holy Spirit. We aren't some kind of holiness club here, folks. If we are into that kind of thing, we don't belong here. We are into something much greater than that. We are into the very life of God Himself, for He has drawn us to Himself and given us His Spirit. That is what it means to bear witness.

As we offer our Eucharist to God the Father through and with Christ now, in the unity of the Holy Spirit, let us offer it with this intention: that you and I will truly be a Church of witness; that the Holy Spirit will continue His work now in our time; that through us the world continue to be convicted of sin, of justice, and of condemnation. That witness is ours to give because the witness of the Spirit and the witness of the Church are one and the same.