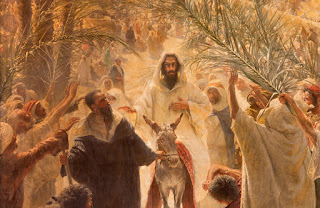 Today with  the celebration of Palm Sunday we see how the people want to declare Jesus King. At least he is brought into Jerusalem as a King,

In the Bible people have wanted to bring Him into Jerusalem as a King several times.

On the mountainside at the miraculous bread multiplication, after seeing the miracles, the people wanted to proclaim Jesus as King. But Jesus goes into hiding, what a pity that people do not understand Him.

Even now when He goes up from the valley to Jerusalem via Bethphage and Bethany, they want to proclaim Him King again. A new David, who makes sure that people become boss again in their own country, who takes care of the little people. The desire in the people seems great for someone who brings deliverance in God's name.

And Jesus is playing the game, for the day will come when people will understand what Kingdom Jesus wants to be King over. He is entering Jerusalem, not high on horseback, as you might expect from a king, but He is sitting on a beast of burden, a donkey. You would think that it could not be less.

Palm Sunday; All over the world, people are reminding ourselves that one of us, Jesus Christ, Prince of Peace, was overtaken as a King. Although welcome, He was watched and betrayed and caught. How He took leave of life, His will, made His covenant with people in bread and cup, in body and blood.

He was welcomed with Hosanna shouting and waving of palms, but , treachery, and money came into their hands. Diplomatically sentenced to death, crucified outside the city.

The Kingship of Jesus ends in his condemnation. He was crucified, just as people are crucified every day. Every day people are mentally and physically destroyed by what others do to them. Through pettiness, through gossip, through elusive villiness, through bending upward and trampling down.

People are crucified every day, just like Jesus of Nazareth, they did not have to take Him away with Him, on the cross with Him.

The Passion is not a story of then and then. The coming week of suffering is not about a prophet whose name is spoken  in our mouths; so pronounced in a curse and a sigh, so that is also over !!!

No, the Passion is also about us people from 2021. People on the road, still. Wild seas and barren, inhospitable deserts, borders everywhere and unpredictable powers, the law of the strongest.

Everywhere still Pilates, Pharisees and Caiaphas who want a kingdom. But right through the tears of Good Friday, it will become clear, on Easter night, what kingdom Jesus wanted to be King of. Not a kingdom rooted in the standards of our world, not a kingdom as we think it should look like, but a kingdom based on love, justice and humility, as former Pope Benedict  regularly told us.

And we play a major role in this. How do we treat each other, how close is the passion story of others in our lives? Do we still have an eye for the suffering of others, or do we find it mainly nagging that we get poured out on us every day?

The Passion of Jesus is the Passion of all times. It means that we, you and I personally, are being invited to hasten the coming of God's kingdom, rather than putting our own kingdoms in the foreground.

Palm Sunday: not a memory of that time, but a concrete assignment for people of today. Amen.