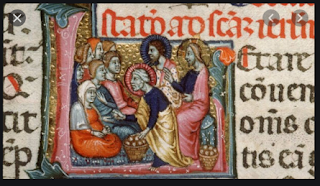 Greetings on this Laetare Sunday, let us Rejoyce!

The first reading is taken from the Book of Chronicles 2 Chron:36:14-16, 19-23. It refers to the edict of Cyrus, the king of Persia, permitting the exiles to return to Jerusalem and rebuild the temple, which had been burned by the Chaldeans as a punishment from God for the infidelities of the Chosen People.

The second reading is from the Letter of St. Paul to the Ephesians 2:4-10. In today's extract St. Paul is emphasizing the gratuitousness of the gift of faith which the Ephesian converts have received. This gift which God gave them, even when they were sinners, had united them to Christ, and has given them the right to share in His glorious resurrection and inherit heaven with Him and through Him. 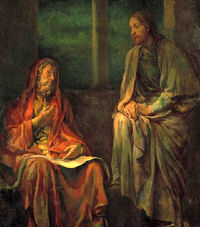 The Gospel is from St. John 3:14-21. This man Nicodemus had a half-open mind as regards Jesus. He was moved by his teaching and miracles. He defended him when his companions were out to have Jesus arrested. He helped to have him properly buried when his enemies had him put to death, but that was as far as he went, apparently. There is no mention of him in the first Christian community of Jerusalem. What held him back, what kept him from giving himself fully to Jesus who spoke so kindly and told him so clearly that he himself was indeed a teacher who had come from God, that he had been offered by God as the sacrificial victim who would save the world? All Nicodemus had to do was to accept his word, "believe in him" and be baptized and he too would have eternal life.

Why did he not do this? The answer is given in the beginning of his story "He came to Jesus by night." He was one of the leading Pharisees and evidently was afraid of what they would think of him had they seen him associating with Jesus. How much more so did he dread what their reactions would be had he become a follower of him whom they called "this impostor." Nicodemus had only half of his mind open to the truth, the other half was closed and barred by his fear of what his own class—the leaders of the Jews—would think of him. He risked his own future happiness in order not to lose the present respect of his sinful associates.

What a foolish man we would all say! Yet, are not many of us often like Nicodemus, when it comes to living up to our following of Christ? There are Catholic men who would like to, and should, go much more often to Holy Communion but are afraid of what their fellow-parishioners, who receive but rarely, would think of them. There are many, far too many, Christians who will not defend or stand up for their religion when it is insulted and attacked in their place of work or in a saloon. There are Christians who stand idly by, and give at least tacit approval, when grave injustices are being carried out by individuals or by local or national groups. These and many more like them are Christian types of Nicodemus, who through fear of losing the approval, the worthless esteem, of their sinful associates, are prepared to forfeit the esteem of God and their own eternal welfare.

Nicodemus probably thought he had made reparation for his lack of openness to Jesus when he assisted at his burial. What value, however, had that work of mercy for one of his frame of mind? There are amongst us today, humanists, most of them ex-Christians, men and women who make assisting their neighbour, while excluding Christ and God, the essence of religion. While the assistance the neighbour receives will benefit him materially, what spiritual or religious value can it have for the humanist who excluded God and our Saviour Jesus Christ? Humanism or concentrating on our neighbour to the exclusion of God, is an imitation of religion and a very false imitation at that. Helping our neighbour because he is a son of God is part of our true religion, and the second of the two great commandments of love; but helping a neighbour from whom we have effaced the image of God has not and cannot have any religious value or significance whatever. It is as meaningless as lighting a candle before the photograph of a wife one has deliberately deserted.

Thank God, we have accepted Christ with our whole heart and our whole mind. It is through him that we have been made sons of God. It is through him that we have learned to love God and learned of God's infinite love for us. Because all men are God's sons also, and our brothers in Christ, we will gladly help them whenever and wherever we can because God has commanded us to do so. This is true humanism which sees in the neighbour the workmanship of the almighty Creator, and what is more important still, the elevating effects of the divine Saviour, as well. 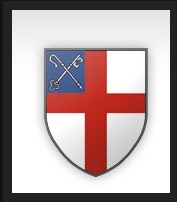