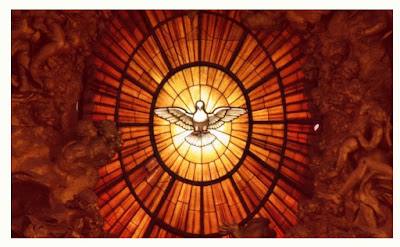 "And there were dwelling at Jerusalem Jews, devout men, out of every nation under heaven. Now when this was noised abroad, the multitude came together, and were confounded, because that every man heard them speak in his own language. And they were all amazed and marvelled, saying one to another, Behold, are not all these which speak Galilaeans? And how hear we every man in our own tongue, wherein we were born?" (Acts 2:5-8).
Did the Apostles speak in "other tongues" on the day of Pentecost when the Holy Ghost descended upon them with a sound from heaven "as of a rushing mighty wind"? Were the Apostles given the gift of "new languages," a special new power, when they were filled with the Holy Ghost, who appeared to them under the sign of "cloven tongues like as of fire" that came to rest upon each one of them?

These are, I must frankly confess, "trick questions," since yes, they did speak in "other tongues," and no, they did not receive a new sort of "apostolic power." The "trick" in them, of course, is not God’s doing. God is not a trickster, but the fallen understanding of man is very tricky indeed, obscuring the Word of God if it is at all possible. And here, as is so often the case, the main trick of the fallen human mind is to divert attention from God to man.

The man-centered mind of sin wants us to believe that the Apostles suddenly obtained some sort of "super powers" of their own to use as they wished in communicating with others. Hidden just beneath the surface of this "super powers" theory, however, is the dangerous thought that you or I might find the same magic over language in ourselves, if the circumstances were right or if we went through the proper mumbo jumbo. If the Apostles had power, why can’t we have the same power?

In fact, large numbers of today’s churches are decidedly in the "super power business." And yet, can any of us really imagine the Apostles speaking with other tongues if the subject matter had been the weather or the price of a camel? There is absolutely no evidence in the Scriptures that they could do any such a thing. There is no evidence that they could turn these other languages on and off as they wished. Thus, if we say that "by their own power" or "at their own will" or "under their own control" the Apostles spoke in foreign languages on the day of Pentecost, we have misrepresented the record of what actually happened. We have made up a story that no one has any obligation to believe.

On the other hand, we know as a matter of fact that the crowd that gathered on Pentecost heard the Apostles preach the Gospel of Jesus Christ in their own native tongues. St. Luke recorded their wonderment: "Parthians, and Medes, and Elamites, and the dwellers in Mesopotamia, and in Judaea, and Cappadocia, in Pontus, and Asia, Phrygia, and Pamphylia, in Egypt, and in the parts of Libya about Cyrene, and strangers of Rome, Jews and proselytes, Cretes and Arabians, we do hear them speak in our tongues the wonderful works of God" (Acts 2:9-11).

The fact of the matter is that no one can truly speak the Truth of God without the help of God, and that no one can truly understand the Truth of God without a corresponding gift of God’s aid. Our Lord was quite specific in his declaration of this double need for the Holy Ghost, both for speaking and for understanding God’s Truth. He told the Apostles at the Last Supper:

If ye love me, keep my commandments. And I will pray the Father, and he shall give you another Comforter, that he may abide with you for ever; Even the Spirit of truth; whom the world cannot receive, because it seeth him not, neither knoweth him: but ye know him; for he dwelleth with you, and shall be in you (John 14:15-17); and he explained,

These things have I spoken unto you, being yet present with you. But the Comforter, which is the Holy Ghost, whom the Father will send in my name, he shall teach you all things, and bring all things to your remembrance, whatsoever I have said unto you (John 14:25-26).

If there is a "native language" of the kingdom of heaven, it is "the wonderful works of God" because the chief purpose of existence is the glorification of God, first expressed in the eternal and mutual love of the Three Persons of the Blessed Trinity and then in the love of God’s creatures for their Creator. When the Holy Ghost descends upon the Apostles on Pentecost, it is not to give them strange new powers but to confirm them and the Church in the glorification of God, opening hearts and minds both to speak and to understand how all the mighty works of God glorify his Holy Name and proclaim his eternal goodness.

Remember the famous "Grace" of St. Paul: "The grace of the Lord Jesus Christ, and the love of God, and the communion [or "fellowship"] of the Holy Ghost, be with you all. Amen" (2 Corinthians 13:14). God the Father and God the Son live eternally in the communion of the Holy Ghost. When the Holy Ghost descends on Pentecost, he brings the Apostles, and through them the other members of the Church, into that divine communion and fellowship.

The "wonderful works of God" that the Holy Ghost puts into the mouths of the Apostles and into the hearts of their hearers is the record of the Father’s love and good will, enacted through God the Son in all of God’s mighty works, and especially in Creation and Redemption. Even our salvation, bought with the Blood of Jesus Christ on the cross, is a God-centered expression of the Father’s love, proclaiming his perfect mercy. But we can understand none of this glory, or speak of it with any justice or authority, except in the communion of the Holy Ghost, where all this glory exists forever in the Godhead.

The many languages of man came about by an act of man’s pride. After the Flood, the survivors’ descendants set out to build a mighty tower at Babel, as a monument to mankind’s greatness. When they did not give the glory to God, when they did not speak or understand God’s "wonderful works" on their behalf, God scattered them and confounded their languages. On the day of Pentecost, God the Holy Ghost began to undo this calamity by putting back into the mouth of man the glory of God, and by opening ears and hearts to that glory. On the Last Day, when our Lord returns in glory, there will be no language except "the wonderful works of God," and the language of heaven will be the "native tongue" once again of those reborn by water and the Holy Ghost, through the Blood of Jesus Christ. Even now we can practice that language of heaven, in the grace of Jesus Christ and in the fellowship of the Holy Ghost, by speaking of the wonderful works of God.