The Sixth Sunday after Trinity 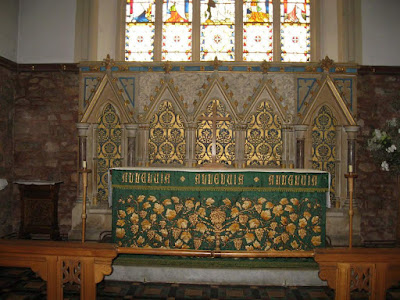 Jesus said to His disciples, "I tell you, unless your holiness surpasses that of the scribes and pharisees, you shall not enter the kingdom of God."

My friends, these words are from our Gospel reading this morning. They are taken from St. Matthew's Gospel and are a part of Jesus' Sermon on the Mount. By way of introduction to what Jesus would teach us this morning, we should be aware of this very important fact: Matthew wrote his Gospel for Jewish converts, for people who had come over to Christianity from Judaism and, therefore, were people who were familiar with the practices and the laws of the Old Testament. Because of this, Matthew has Jesus teaching the people on a mountainside.

Did you ever wonder why Jesus went up on a mountain to teach His disciples? It wasn't only that He would have a natural amphitheater so they could hear better. There was something more, something symbolic about it. Remember it was God who gave the law to the people of Israel on Mount Sinai. Moses went up on the mountain and received the tablets of the law from God. And now it is Jesus the Lord, the new lawgiver, who is giving the new law from the mount.

What is it that He is teaching? Something so simple, that it is easily misunderstood or even taken for granted. There is a difference, Jesus is saying, between the letter of the law and the spirit of the law. He begins by saying, "it was said to you in ancient days, thou shalt not kill. But I say to you. . ." Then He goes on to talk about anger toward one's brother. There is a great deal of difference between going down the street with a submachine gun and murdering people and the spirit of the law that involves our dealings with one another. You and I are not prone to the kind of violence that would be murder. We will not kill. But we shouldn't feel that we are quite good and quite justified simply because we are keeping literally and narrowly the Ten Commandments. So we haven't killed anybody this week. We haven't stolen. We haven't robbed any banks. We have not committed adultery. Wonderful. That's great. That is the letter of the law.

But Jesus is saying that in the new kingdom that He comes to establish, there is to be much more than a narrow attitude toward the law. "Unless your holiness surpasses that of the scribes and pharisees, you shall not enter the kingdom of God." The scribes and pharisees kept the law literally; no more, no less. Jesus is saying, "there's more to it than that; much more than that." So, He talks about attitudes that you and I might have whereby we offend God and commit sin, not necessarily through an act, but even by the thought and the desire to act. That of itself can and should be seen as sinful. ". . .What I say to you is everyone who grows angry with his brother shall be liable to the judgment. Any man who uses abusive language toward his brother shall be answerable to the Sanhedrin and he who holds him in contempt, he risks the fires of Gehenna."

I like what we just read in the Gospel reading from the King James version: "Anyone who says to his brother 'raca' will be liable to the Sanhedrin." What's 'raca'? Have you called anybody 'raca' lately? What does it mean? In ancient Hebrew it means 'you blockhead'. That's the best translation that I can come up with. "You're a blockhead!" Jesus was saying, "That kind of an attitude is beyond 'thou shalt not kill, but it is also something that should not be a part of a Christian's life."

And, "You fool!" Well, we're quite capable of calling people foolish. But there is a very narrow meaning for the word 'fool' in the Scriptures. A fool is an unbeliever. As the Psalmist says, "The fool says in his heart, 'There is no God."' (Ps.53:l) If you, a Jew, are calling someone an unbeliever, that's about the worst thing that you can say about him. You're really trashing him.

Jesus is saying, "You trash him with those words, and, in turn, you can end up as trash." That's the whole meaning of 'risking the fires of Gehenna'. Gehenna is a valley on the southeast corner of the city of Jerusalem. The valley was the city dump. And down in that city dump, they threw all of their trash. Like most city dumps, it was smoldering all the time, burning. It was the trash heap. And Jesus is saying, "This is not the way that a Christian will behave toward another Christian in this new kingdom according to this new law."

There is quite a difference, isn't there, between the letter of the law and the spirit of the law. Yet, throughout Scripture we can see that distinction made over and over again. St. John, in one of his letters, writes that if you speak ill of your neighbour you're guilty of murder (1Jn 3:15). That's strong language. But it is true. If you speak ill of your neighbour, something is involved and it's simply this: You and I have a right to a good reputation. If you slander an individual's good name, that is not only a sin against charity; it's a sin against justice because you slander that person's right to his good name.

You and I are quite prone to excusing ourselves and the sins we commit. We do this almost offhandedly. We say, "Well, that is my temperament. That's the way I am. I can excuse my faults and my flaws because I've always been that way." What we do is wink at our own faults and then we condemn them in others. Remember that Gospel reading of a couple of weeks ago about a man who had a beam in his eye and he was going to take a we are to live according to the spirit of the law. According to the spirit of that law, we do not excuse ourselves, but rather acknowledge the fact that we can and do sin. That we can and do sin several times a day.

What Jesus says we should not do to our brother are all things that are done with that one little part of us that can get us into so much trouble: our tongues. Our tongues are the source of more sin than any other part of our selves. We can really get into trouble with what we say. I learned a long time ago in my marriage that if I didn't say some things to my wife, I didn't have to retract them later. It was a good thing to learn! St. James, in his letter, writes very strongly about this power of ours, this tongue of ours:

"All of us fall short in many respects. If a person is without fault in speech, he is a man in the fullest sense because he can control his entire body. When we put bits in the mouths of horses to make them obey us, we guide the rest of their bodies. It is the same with ships, however large they are and despite the fact they are driven by fierce winds, they are directed by very small rudders on whatever course the steerman's impulse may select. The tongue is something like that. It is a small member, yet it makes great pretensions. See how tiny the spark is that sets a huge forest ablaze. The tongue is such a flame. It exists among our members as whole universe of malice. The tongue defiles the entire body. Its flames encircle our course from birth and its fire is kindled by hell" (James 3:2-6).

Each of us needs to examine ourselves regularly, particularly about the power this tongue of ours has. We should try, to the best of our ability, to do no evil with that tongue; that we would set no forest aflame; that we would not be guilty of any injustice because we have injured the reputation, the good name of another.

Today as we offer this Eucharist and we offer ourselves, souls and bodies, to God our Father, through and with Christ, let us remember that one part of our body, that is, our tongue. Let us offer our tongues to God, that they will be used only in praise of him.

Ubi Caritas, sung by the Schola Cantorum of Saint James