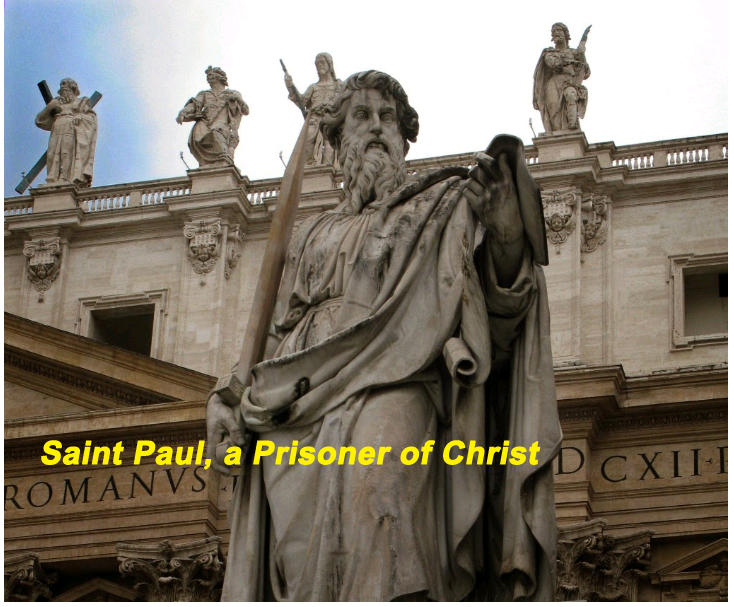 "For this cause I bow my knees unto the Father of our Lord Jesus Christ, Of whom the whole family in heaven and earth is named, That he would grant you, according to the riches of his glory, to be strengthened with might by his Spirit in the inner man; That Christ may dwell in your hearts by faith; that ye, being rooted and grounded in love, May be able to comprehend with all saints what is the breadth, and length, and depth, and height; And to know the love of Christ, which passeth knowledge, that ye might be filled with all the fulness of God" (Ephesians 3:14-19)

St. Paul wrote the Epistle to the Ephesians while he was a prisoner in Rome, which fact explains why he calls himself "the prisoner of Jesus Christ" (3:1) and refers to his "tribulations" in the letter. Many scholars believe that he sent it, not just to the Ephesians, but to all of the churches in Asia Minor (of which Ephesus was the capital), as a general religious tract, to remind them of some basics of the Christian Faith.

And nothing could be more basic to Christianity than the prayer that is our text this morning. St. Paul "bows his knees" or kneels, using the posture of prayer that set Christians apart from the Jews, who usually stood to pray. He prays to the Father that he might bless the Church through his Incarnate Son Jesus Christ and by the indwelling of the Holy Ghost, invoking the central and essential truth of the Christian Faith—the Blessed Trinity. God has revealed himself to be One God in Three Persons, without division or inequality, God the Father, God the Son, and God the Holy Ghost.

Many people have the strange idea that the Blessed Trinity is an "idea" or an "opinion" of Christians that others may take or leave as they wish. If we look earlier in this letter, however, we will find that St. Paul declares that the very purpose of his call to be an apostle is to preach "among the Gentiles the unsearchable riches of Jesus Christ" (Ephesians 3:8). These riches are "unsearchable" in the sense that the truth which God reveals in Jesus Christ cannot be found out in any other way. Only Christ himself, in his Gospel of salvation, can reveal the secret things of God that are beyond the reach of human investigation.

Furthermore, St. Paul’s mission to the Gentiles is meant to share with those who are not the blood descendants of Abraham the promises that God made to Abraham, the chief of which is that those who follow Abraham in faith will know and worship God as he truly is unto their eternal salvation. When St. Paul introduces his prayer by saying, "For this cause," this is the purpose that he means by those words:

…to make all men see what is the fellowship of the mystery, which from the beginning of the world hath been hid in God, who created all things by Jesus Christ: To the intent that now unto the principalities and powers in heavenly places might be known by the church the manifold wisdom of God (Ephesians 3:9-10).

The "mystery" is the revelation of God that he is the Blessed Trinity and intends mankind for eternal life, which man could not know until God revealed it, because it was hidden in God. The "fellowship of the mystery" is the Church, which is called to teach the revealed truth of God to all men everywhere, for the sake of their salvation, making them obedient disciples of Christ, by whom God the Father has created and redeemed the world. And at the heart of God’s will, not only for the Church, but also for the whole of creation, including the angels in heaven, is to make known in the living and teaching of the Church, as the Body of his Son Jesus Christ, his own glorious wisdom, even his own knowledge of himself.

We summarize that wisdom and knowledge by the Name "the Blessed Trinity," not because we claim by it to understand God as he understands us. Rather, we submit ourselves, our doubts, and our imaginations to God himself, entirely on God’s own terms. The sort of knowledge that we have of God is the knowledge of communion, of "the fellowship of the mystery" that God establishes with us through the Son and by the Holy Ghost. Apart from that revealed mystery of the Three-in-One and the One-in-Three, there is no communion with God, and no true knowledge of him at all.

For this cause, as St. Paul says, we pray to the Father for the might of the Holy Ghost to strengthen our hearts and minds and souls to live in and by Jesus Christ. Our living and our knowledge only have eternal significance if they are rooted in the love of Jesus Christ, not only for us, but for his Father and the Holy Ghost. Faith is something that we cannot give God, until he gives it to us in the first place by the power of the life of his Son and the entrance into our life by the Holy Ghost. It is only then that we can begin to comprehend with all the saints, with all the believers who live in communion with the Blessed Trinity, the full dimensions of God’s love.

God has the full initiative, to which we respond with the help of his grace. And it is a good thing that the initiative for our believing and living in communion with God is in God’s own hands, because the goals of God’s work in our lives constitute great, supernatural miracles beyond the power of any human being. God wills that we know the love of Jesus Christ, which is greater than the power of any creature to know. God wills that we finite human creatures be filled with his own infinite fullness. Thus, we must come to understand very quickly that to know the love of Jesus Christ and to be filled with the fullness of God are eternal and never-ending blessings. We will never be done knowing and learning the love of Christ, and we will never exhaust the fullness of God’s glory, might, mercy, goodness, honor, and wisdom.

More and more we hear people talk about their belief in a vague "spiritual power," as if such vagueness could replace a life lived in fellowship with the One True God. We hear people describe the Blessed Trinity as "three ways of looking at God," instead of the revealed mystery of God’s own life of Three distinct Persons in a single Godhead. We hear people say that calling God "mother" is just as good as calling God "the Father, the Son, and the Holy Ghost" as Jesus Christ revealed God to us. And from these denials of the central truth of revealed Christianity come all the confusions and errors that keep more and more of the so-called "Christian churches" from being Christian in any meaningful sense of the world.

God himself is the only reason for faith, morality, and decency; and God as he reveals himself is the only standard by which we can know that we are faithful, moral, or decent. The heart of Christianity is the truth, and we destroy that heart and Christianity, when we deny the truth of God as he is. Denial, however, will not change that truth or destroy it, because denial cannot destroy God. It can only destroy us.

But we need not die. The Son of God became man, preached, died on the cross, and rose again from the dead so that we could know the truth about God and enter into that truth by communion. And the primary fact of that communion is our live-giving and eternal fellowship by grace with God the Father, God the Son, and God the Holy Ghost, the Blessed and eternal Trinity. All the other possibilities of our lives as Christians begin there, and only there, with the self-revelation of God.