The Second Sunday after Christmas 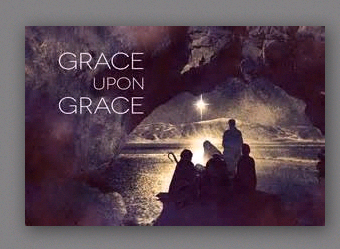 This Gospel reading as on Christmas Day, consists of the opening chapter of Saint John's gospel - the last of the four gospels to be written according to most of the Scripture scholars.

The story about Saint John - bits of which are legendary no doubt - is that having been a young man as a disciple of Jesus, he went on various missionary journeys after Jesus' Resurrection, like all the other apostles. The story goes that John was the only one not to be martyred, and in fact he lived well into old age and eventually retired to live as a hermit on the island of Patmos, in the Aegean Sea near the west coast of Turkey.

Whether Saint John actually did those things or not his gospel is certainly written in very different language from the other three - a more poetic, mystical language which goes out of its way to emphasise Jesus' divine nature shining through his humanity. For John, as we just heard, Jesus was the Word of God who was with God, and who was God, from the beginning of time.

God's Word - which is to say, God's communication to humanity, and God's intervention in human affairs - had previously been conveyed in the preaching of the Old Testament prophets or worked out from a careful reading of historical events. But then, according to John, God's message was communicated more directly, in the form of the person of Jesus.

So this was Saint John's way of describing the Christmas mystery, the mystery of the Incarnation - not with the image of the child Jesus in the manger, but in this more abstract and mystical reflection about the eternal Word of God taking human form. That's the first point that's worth considering.

The second, slightly wider point, is that this mystical tendency of John's was a general feature of all his writings, and it's the main thing that makes his gospel different from the other three. More than any of the other gospel writers, John seems to be writing from the standpoint of his own personal experience of contemplating God, his own intuitive knowledge and mystical experience.

John's starting point is always the mystery of God - the fact that God is mostly hidden or beyond our ordinary perception. God is someone most of us only manage to catch fleeting glimpses of.

That's the basic starting point of all mystics - the conviction that our normal practical, logical way of looking at things, which might be very useful in terms of understanding how the material world works, is almost worthless as a way of getting to know God or entering into the mystery of God. In fact our modern mentality, which is often geared to organising and achieving and getting things done efficiently, is in many ways a barrier to the genuine experience of God.

My impression is that a growing number of people have found the Church of our own time rather lacking in this contemplative aspect. Living in a secular environment, which is either indifferent or even hostile towards religion, there's always the danger that we try too hard to present the Christian message in terms of ordinary mainstream values and the secular mentality, because we don't want the Christian faith to appear irrelevant to real life.

The truth is, though, that faith in Christ isn't just a matter of being relevant to real life - it's meant to be something which changes the whole framework that we look at real life in.

It's part of the irony of our present circumstances, maybe, that while a lot of people who have been Christians all their life feel pressurised to almost reduce God to human dimensions, to try to make him palatable or even comprehensible to an unbelieving mentality, many of the men and women who become converts to the Christian faith from a completely non-religious background, describe a kind of turning away from a purely secular view of life, and an awakening sense of the mystery of God, as the first stages of their conversion.

So there are two lessons I would draw in particular from the gospel reading this Sunday. One is that Saint John had a more contemplative tendency than perhaps the other gospel writers had, and that led him to describe Jesus' Incarnation in his own mystical language. And the other point is that the contemplative aspect of faith in God isn't only for a few special individuals who might have a particular kind of temperament. It's actually an important aspect of the faith itself, which we should all have an experience of, as part of our own conversion to God, and part of our lifelong growth in knowledge of God.