The Ninth Sunday after Trinity - July 2021 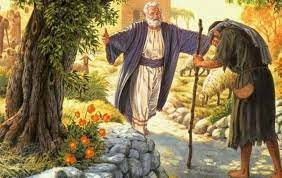 "My son," replied the father, "You are with me always and everything I have is yours, but we had to celebrate and rejoice. This brother of yours was dead and has come back to life. He was lost and is found."

I'd like to share some things with you this morning. Some of it is old and some of it, I pray God, is a bit new for you. There are three individuals in this story. We can say a few words about each one of them but particularly about the third one. We want to concentrate on him because he is the centerpiece of the story.

First of all is that prodigal younger son. He had no claim to his share of the inheritance; not until after his father died. But he evidently made such a fuss that the father capitulated to his demands. He divided his property in shares: two-thirds to the older brother and one-third to the younger, according to the Law as outlined in the twenty-second chapter of the Book of Deuteronomy. The younger son could now go off and seek his fortune and adventure. We know what happened to him. He went off to a far country and blew it all and got so hungry that eventually he was reduced to feeding pigs. Jesus' Jewish listeners would have really understood that. How low could a person get than to feed swine? Then he made a hundred and eighty degree turn and he came back to his father.

We have a story of sin and conversion. Essentially conversion, at its root, means to turn back, to return. The Prodigal was converted. And he was humbled. He came back home to seek and receive his father's forgiveness.

Imagine the father, if you will, each day hoping that this son that he hasn't heard from for so long might return. Perhaps he would occasionally go up on the flat roof of his house and scan the horizon, hoping against hope. Perhaps he would walk up to a hill and look as far as he could see and wonder, "Where is my son? Is he living or dead?" One day he spied his son a long way off, but like a good father he knew his son - perhaps the way he walked. The son, in tatters, trudged along the road barefoot, dirty, smelling of those swine, approaches his father. His father can't wait. He runs out and meets him on the road, grabs him and hugs and kisses him. The young man begins his confession to his father, "Father, I have sinned against heaven and against you." That's about all he can get out, before his father interrupts him. He will hear no more of it. He's already forgiven him. He calls to the servants to dress him with a fine robe, put shoes on him, and a ring on his finger, kill the fatted calf, and celebrate. He wasn't dead after all; he was alive!

What a beautiful story! Jesus could have ended it there. But Jesus said, "Wait, there's more." As the celebration is going on, we turn our attention to that older son. (That poor father really had a problem with his kids.) The older son hears all the noise and the music and the dancing and celebration. "What's this about?" The overjoyed servants tell him. He's so angry he won't even go into the celebration. His father has to come out and beg him to come in, beg him to be reconciled with his brother. And he won't do it. He will have none of it.

Notice in the story that he doesn't even call his father, "Father," at this point. It's as though he's lost respect for his father for being so weak as to take back this youngest son. And certainly he won't call this brother, his brother. It's "that son of yours." The story is left open-ended. Did he go back in? We don't know. He may have. We would hope so. The family lived happily ever after. Perhaps he didn't. Wouldn't that have been a worse sin than what the prodigal had committed? There is nothing worse than brother against brother; nothing more bloody than civil war.

Do you identify with the prodigal son? Perhaps. Perhaps you can say, "There was a time that I was so far from God, so miserable and so unhappy until I came to my senses and said, "I can't live like this any more in this sinful way." You turned back to God to ask His forgiveness. And you received it generously as the prodigal did.

Maybe you're like that elder son. "I can't understand," we might say, "how God can be so merciful and so generous. After all, look what this man has done." You and I can find it so hard to forgive mistakes in others, like that eldest son. And yet, God, our Father, is as generous in His love to each one of us as He is to the one who needs that great conversion. There is a little bit of the Prodigal in us. There's a little bit of the elder son. But I would think Jesus really wants us to be imitators of that father who received the son back.

Think of his option. That father who would think day after day, "I gave away my life savings, my fortune, to this kid and I don't even know where he is. And here he is, back again." He could react in a variety of ways. How about stony silence? "I'm not going to say a word to him. I'll let him twist slowly in the wind. He'll remember what he did." Or, how about this: He comes home and the father gives his son The Lecture which will include, "I told you so." If you are a father, you have given your children The Lecture, "I told you so."

But he didn't give him a lecture. He received him back, no questions asked. Strange indeed! Or he could have said, "All right, you're back. You can sleep out with the hired hands and we'll put you to work and we'll give you some jobs to do around here and we'll see how it goes. I'll receive you back half way." After all, that's all the son really expected his father to do for him. "Treat me as one of your hired hands." He never got that option out to his father, but that's what he was thinking and rehearsing as he trudged along the road.

No, the father just embraced him. This is a crazy father. This is not the kind of father that you would expect. But that's precisely the point that Jesus wants to make. This is the way of your heavenly Father. Remember that Jesus came into the world to reveal the Father to us. He said, "He who sees me, sees the Father also". If you understand me," says Jesus, "you'll understand your Father." Jesus was so quick to forgive. So is our Father. But it's one of the most difficult things that you and I ever do.

St. Paul understood this. In his misguided zeal, he persecuted the Church of Christ before his conversion. Later, Paul understood who he was, and who we Christians ought to be. This is what Paul writes in his Second Letter to the Corinthians:

We can behave in a variety of ways. We can act like that elder brother. We can act like many typical fathers might do with the silent treatment or The Lecture. Or we can be as this uncommon father was in the parable of the prodigal: one who forgives completely and totally; one who seeks reconciliation with others. These choices are ours to make. Pray God we make the right choice. Today this is what we offer to God our Father in this Eucharist: through, with, and in Christ our Lord, may each of us be ministers of reconciliation.